Charmed by chocolate? Captivated by caramels? Partial to peanut butter? As far as i’m concerned, this is the Holy Trinity of treats. Being crazy for confection doesn’t mean sporting a muffin top and cellulite at all times, especially when nature offers many a sweet alternative. These peanut butter caramel balls are my favourite sweets to date. Whilst they aren’t exactly lo-cal, they’re wheat, dairy and gluten free and a single serving is more than enough to satisfy a bothersome sugar craving. Smaller and richer than Bernie Eccleston, these are the gastronomic equivalent of a penthouse in Knightsbridge…excessive, so go easy. Chic enough to throw into the dinner party mix but easy enough for a five year old to assemble, they’re a really good make ahead if you’re entertaining.  Here’s how: 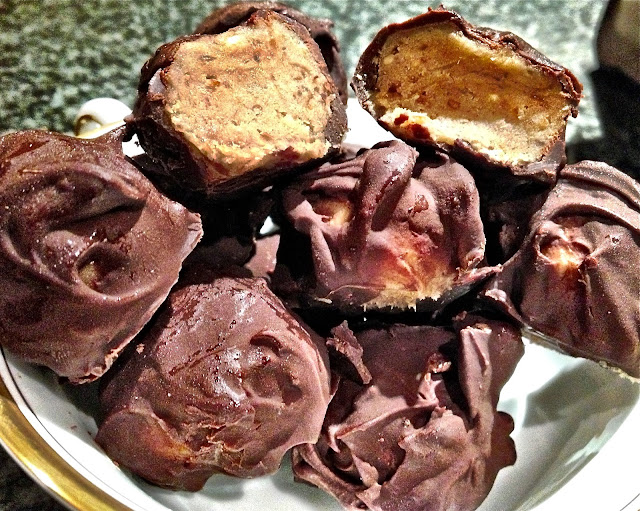 1. Remove the stones in the dates and soak in water with the honey and cinnamon for about 20 minutes.
2. Blitz the soaked dates in a food processor until they form a paste.
3. Add the peanut butter and blend until combined then do the same with the coconut oil.
4. Divide the mixture into small pieces using a teaspoon and place on a sheet of tin foil until all of the mixture has been used. It will be quite soft at this point but don’t be alarmed, you can roll it into balls when it’s had some time in the freezer. Freeze for around 20 minutes.
5. Once the mixture has cooled a little, roll into balls and freeze for another 30 minutes.
6. Melt the chocolate in a saucepan over a low heat then add in a little salt. You can do this in a glass bowl over simmering water but it’s a hass and you’ll only have more to wash up later.
7. Coat each ball in the melted chocolate and freeze them until party time.

Do You Need The (Vitamin) D?